It used to be simple.

Scout and I had Alex. I was exhausted, never wanted to go through pregnant and newborn again. He only ever wanted one child. He got his boy on the first shot. Done.

Then my dad died, I was destroyed, and the only thing that that let me survive that was my brothers. Granted, non-legal step-brothers if one wanted to be technical. Still. These men are the brothers of my heart, of my soul, and no amount of blood, nor lack of it, changes my family love for them.

Scout had no siblings – biological, of the heart, or otherwise. So he had no comparison, no drive, no longing to give Alex what I had.

We eventually came to the “let fate decide” point – schedule the snip n clip, if we are pregnant before then, another baby it is. If we are not – we are not, forever hold our peace. Before the appointment day came, we were separated and in different states.

My next two “relationships” if you will, were with men who: 1. Had boys already and 2. Had the snip n clip done.

Again, it was easy. With these men, there was no option of me birthing another child, and they had siblings ready built in for Alex. Simple.

Then I spent the next year alone. Can’t get pregnant alone, unless we are naming her Jesusette. Simple.

What little thought I gave to it, came down on the side of “Fuck no, I like my sleep, I love Alex, I never want to live through three again. Ever.”

When I went any deeper into it, Scout and I are golden in our agreements because we each only have Alex. We have no split loyalties with our love. All we do, focuses on Alex and that forever unifies us in our decisions. It allows to parent him beyond well, and together, same page.

No more children for me. Baby factory closed. The End.

Then God laughed, as he does when I make a plan.

Enter “Mine”. Who has a son. Who can look out at life and be open to the possibilities of more children. He also comes from a family of FIVE children (yes his mom is a brilliant saint). His perspective is wholly different.

Enter my hormones. The ones that raged out of control in an “I must have you NOW” fashion on a day where, if I had WANTED to make a baby, I would have done exactly what I did.

The next 24 hours brought an order from drugstore.com for some Plan B and an appointment with my GP for some actual birth control.

I tell you ALL of that to tell you this –

I sat in that doctor’s office alone, waiting for her. I was contemplating tubal ligation, IUD, the pill, ready to hear whatever other options she had for me that would keep me from being pregnant in the near future.

I realized I HAD A CHOICE. My heart could be open to having another child. I HAD A CHOICE. Just like everything else in this last year – WHAT DID I WANT? This massive mountain of thought sat in front of me while I chewed through it. I HAD A CHOICE. It was ALL ABOUT ME. Wow.

The doctor came in and we talked about the shot – which if you are on for more than two years, they will want to take a bone density test because it can eat at your bones. Another guide – I would know in less than two years if I wanted another child.

Going through these options, gave me the parameters to know how long I would want to take to make this decision, and it gave me the freedom to know I actually could make my own decision.

My shiny new Nuva Ring, sat in my refrigerator, waiting the start of my period. I went through the horrifying thundercunt days of far too many hormones raging through my system, along with the stress of “am I? am I not?”

I was still sure that another child was no where in my plans – now, a year from now, two years from now.

I tell you ALL OF THAT to tell you this.

There was a spark in me.

A spark that said, “Hey. This would be okay. Ya’ll would have a sweet, adorable, little one. Mayhap even a GIRL. This could be a really good thing. It would all work out. This could be happily ever after.”

That stilled me, stunned me – after everything I have seen, survived, and done – after the walls of cynicism and fuck you have been built high and hard –

Another child? Probably not, but I have some time, and I have a choice in the matter. I also have the optimism that whatever I choose will be right. For me and for us. 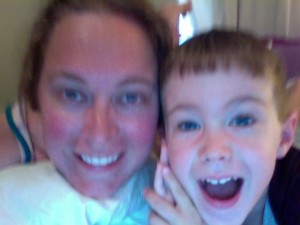