(Edited January 1, 2014. Since posting this, my site has been hacked three times. Comments on this post are now closed. The purpose of it being here is so Jason Boman’s name is out there where people can find out a version of what happened. I believe this to be the accurate version of what happened, but there are always more than one side to a story. Further searching on the ‘net will bring readers to a blog written by the defense attorney in this case. The defense attorney did his job, and earned the tens of thousands of dollars he was paid to represent Boman in this case. His post reflects this bias as well.

I hope this post provides people with information they would not have had otherwise. That the next batch of people who meet Boman can take this information and decide for themselves if they want to get to know him better.)

(Edited October 22, 2013. Since posting this, my site has been hacked twice. I’ve had this site up for almost seven years and I’ve never been hacked. While I cannot prove a connection, I don’t believe it is a coincidence. Go ahead. Hack away. I still won’t be silent.)

(Additionally, there a couple of comments waiting in moderation, I have not yet answered them or posted them because I do not have all the answers to the questions yet. The Kansas City Star has an article ready to run about this, but they have been focusing on the Daisy Coleman case – which, interestingly affects my town as well. I also hope to have some very good things to say about what has happened since this was originally posted in the next couple of weeks. Until then, thank you for your support and thank you for thinking about this so people can make better choices  in the future.)

The United States Air Force has a Sexual Assault Prevention and Response Program.

From the above linked site comes the following definition

Followed by this definition

Consent
“Consent” is defined as words or overt acts indicating a freely given agreement to the  sexual conduct at issue by a competent person. An expression of lack of  consent through words or conduct means there is no consent. Lack of verbal or physical resistance or submission resulting from the one accused use of force, threat of force, or placing another person in fear does not constitute consent. A current or previous dating relationship by itself or the manner of dress of the person involved with the accused in the sexual conduct at issue shall not constitute consent.

To sum up, in the words of the members of the Air Force I have spoken with

A DRUNK PERSON CAN NOT GIVE CONSENT

This seems like something that, say, a person educated through the Air Force Academy, a person who has earned the rank of Captain, a person who is entrusted with a multi billion dollar aircraft, should be able to understand.

This seems like a concept that Captain Jason Wayne Boman of Whiteman Air Force Base should understand.

(I am not posting his photograph here, because I have not requested permission to use his photo, however clicking his name will take you a photograph.)

She and Boman had been acquainted for a few years through mutual friends. He offered her a ride to his place where she could sleep, as she lived out of town at this time.

She chose to trust someone she had  known for a long period of time and someone sworn to uphold certain codes. She believed she was making a better choice than walking alone at night or driving her car while she was drunk.

She woke to Boman with his hands on her. In her. Then having sex with her. (Edited to add at 9pm CDT September 21, 2013: She was sleeping in a guest room. When she woke, she tried to get him to stop.*)

She did not give consent.

Jason Boman had sex with Tabitha Phegley without her consent.

She reported it to the local police, she had the rape kit done. The rape kit was never processed because he admitted he had sex with her.

A number of people witnessed she was drunk.

Jason Boman had sex with Tabitha Phegley when she was drunk.

A drunk person can not give consent. 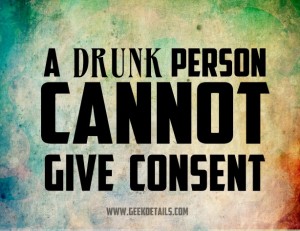 In September 2012, the Air Force requested jurisdiction over the case from the Johnson County Missouri prosecutor. The county prosecutor gave them jurisdiction because according to the statutes of the state of Missouri, because Boman did not beat her, the maximum he could be charged with was sexual assault.

Yes, in the state of Missouri, the law will only call if rape if the target is physically abused beyond the sexual assault. (We are the state that has to claim Todd Akin and the “legitimate rape” comment. Apparently some of his reasoning was defined by Missouri Statute Law… My apologies… I said I would stick to the blunt facts … I digress…)

Boman was charged and a court martial scheduled. (Screen capture of JAG docket and charges below. This was taken September 13, 2013.) (If you can not see the photo below click here) 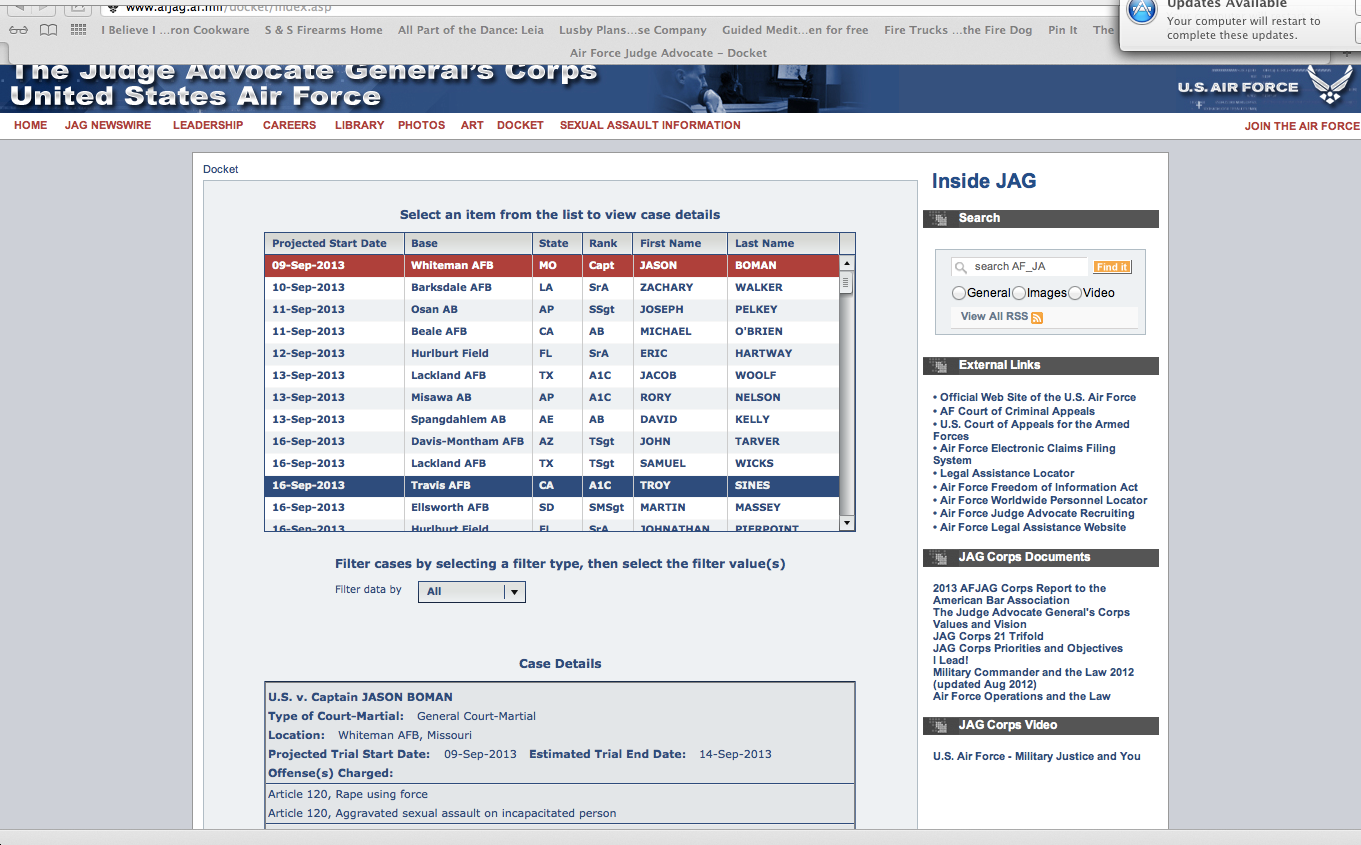 The Air Force says that a drunk person can not give consent. Those instructions are crystal clear.

Therefore, my question is, why is Jason Boman free?

He had sex with Tabitha Phegley without her consent. A person who he had been educated could not give consent as she was drunk. Yet he was found not guilty by a jury of his military peers.

This is where my anger begins to fly.

Why is this man allowed to fly a multi billion dollar aircraft? Why is he continuing to have the prestige of wearing that pilot uniform? Why is he allowed to be free? Why doesn’t he have to register himself as a sex offender? Why isn’t he being dishonorably discharged from the United States Air Force? Why are our tax dollars paying his salary?

Why? Why was Jason Boman found not guilty when he had sex with Tabitha Phegley without her consent?

I want to know why the Air Force has chosen to ignore their Core Values of Integrity First, Service Before Self, and Excellence In All We Do. I want to know why Captain Jason Wayne Boman is free to do as he wants.

We have seen what he does when he does as he wants. He raped a non consenting woman.

If he got away with it once, the message to him is clear. Go ahead, do what you want, the Air Force will give you no consequences.

The message to us is clear as well. We can condone his actions with our silence or we can speak up. We can repost to every social media outlet we can find. We can send this information to our local media. We can contact our representatives. We can ask the leader of the 509th Bomb Wing Brigadier General Thomas A. Bussiere (contact form) why this man’s actions have been condoned.

We will not be silent, and we will not rest as long as those who have sworn to protect, choose to hurt us instead.