It’s been a dark couple months in my head. December was filled with promises of awesome, and it just didn’t happen. I ended 2011 alone and bleak and sick. January opened with beautiful weather and a few healthy days for me, and then falling from the death plague that kept me in bed for four days (no really. me. bed. four days. ridic.) and I’m STILL moving through the exhaustion points. Don’t say mono to me, I don’t even want to think it. *lalalalala*

Things just haven’t shaped up the way I planned, prayed, hoped. I thought I was building a future, but I’ve been feeling stuck. I *did* go look for some newness and fun – and then got all germy and bedridden so that stifled the get out and get fun.

All the while, I knew my head was trying to work something out. I wanted it to just get the heck on with it, but there’s no rushing my brain when it’s chewing on something big.

I’ve found myself in church a couple times. Once they talked about teamwork. This week it was all about how we get what we NEED.

I have no crystal ball, so I started taking bits of what the preacher man talked about and looking at things that have happened in my life. Then I really zoomed in on the men I’ve chosen through the years, the ones that haven’t worked out (which I suppose has been all of them, but I mean the ones that didn’t even really get a chance to work).

There was the bad boy who landed himself in jail at some point (so I heard).

The fun boy who now has a recreational coke habit (so I heard).

The good friend who is now married to someone who is just a perfect fit for him.

The great guy friend, so cute, who is now with an equally so cute GUY friend. And the other one. And the OTHER one.

The hot boy who lost all his hair.

The hot boy who grew out a Grizzly Adams beard and loves it.

The church boy who spent so many years stoned it’s a wonder he ever graduated college and may now still be working at Blockbuster.

The boy who is so freakin’ conservative I want to claw out my eyes and ears after 10 minutes engaged in conversation.

and so on and so forth (thanks fb friends list for giving me things to jog my memory).

Most of these people grew up to be much different than I had expected, sometimes it is just surprising the paths they took, others I just straight up don’t like who they grew into.

I’m finally back into living with the flow. I can tell the total difference in my heart. There’s some acceptance of things not gone my way, there’s some love light has been snuffed out (which hurts, regardless of my bravado), mostly I’m just back to something that resembles okay. And grateful. 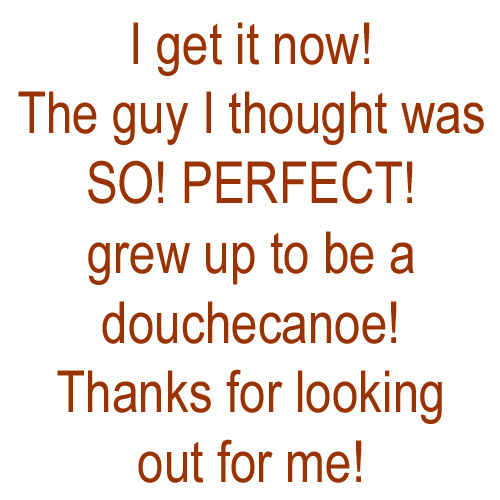