Alex has been off with Scout since December 21st. They have run about and touched probably every state in the midwest.

Almost two weeks, they will be back tomorrow. Day 14.

I’ve talked to him once, he told me about a semi truck that had run off the slick road and told me that he was going to start keeping a list of all the cars he saw off in the ditches. Past that, there have been some texts meant for each other passed via Scout, but overall, nope.

Single parenting is hard, yo. I have a choice, I can either pine for my little one or I can recharge my mommy battery. I can watch Dexter without having to hit the pause button, I can (and DID) sleep until one in the afternoon.

More important than that is that I believe that sitting around and missing Alex would be asking to take something away from him and Scout. They need each other in a different way than Alex and I do. They need this time together so very much, why would I wish it away from them? Sending them off into their adventures with an open heart seems like the least I can do.

Come tomorrow afternoon, I will be ears perking up at the sound of every car that passes the house. I will get excited come nightfall when they should be back. I will smile as he sits and hugs and kisses each of his pets. I will want to hold the very wiggly boy and feel that love that only glows from my heart when I relax when he is in my arms.

Until then, I’m grateful he is with his daddy who loves him, that he has been taken to see so many who also love him, and forever thankful that he always comes home to me. 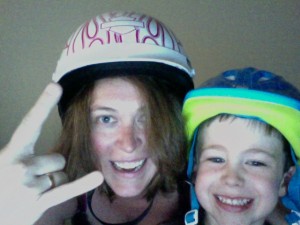